Weavers of Dreams, Spinners of Tales 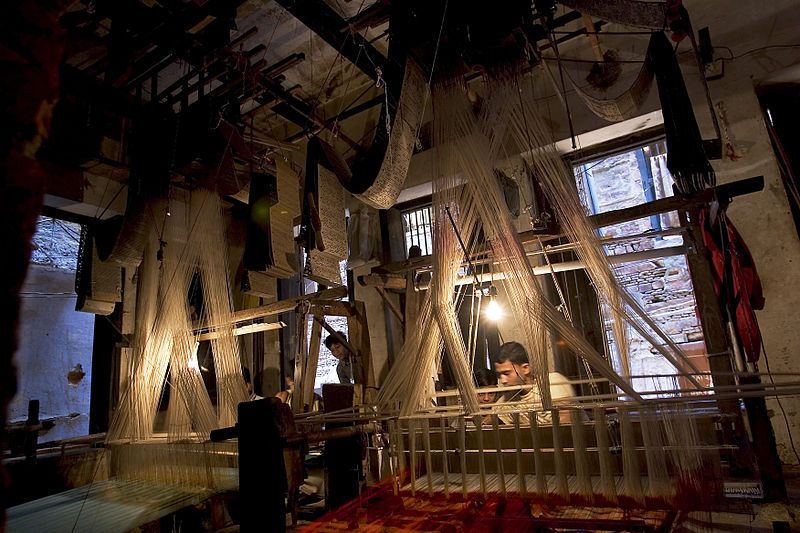 The gift thali was brought in ceremoniously and laid at my feet. Lolling desultorily at the edge of the growing spread of brightly decorated patters, I looked away with pretended, practised disinterest. After all, the gifts were upon the birth of my brother and at the grand old age of 3, I was convinced that my supreme position in our family had been usurped by an interloper. I wasn’t particularly enamoured of this new baby. Family legend has it that I developed extreme high fever (possibly through extreme jealousy!) and my distraught mother, her hands full with a colicky newborn, sent me to stay with my maternal grandparents for an extended period. This arrangement suited me just fine. The eldest and only grandchild, I ruled over that household; I was queen, princess and diva of my personal kingdom, with adoring grandparents, uncles and aunts at my feet. That particular day however was my brother’s annaprasana and I was back home, trying not to succumb to a sinking sense of betrayal as the platters arrived, decorated ever so artistically by my grandmother, erstwhile considered the most loyal subject under my rule and my staunchest ally. “Don’t you want to look?” she gently asked. “This one is for you.”

Out of the corner of my eye, I spied a shimmering pile of delicate pink. Turning to look closely, glorious golden patterns emerged in the fabric. Nestled amongst the folds was a golden necklace, its mango-shaped pendant echoing the design in the saree, the stone in the centre - a deep pink ruby. “Was this truly mine?” I wondered and indeed it was. A mini Banarasi saree, complete in itself, mimicking the Banarasis I’d rifled through in the closets of my mother and grandmother, enveloping my tiny body within their sinuous textures. I remember caressing the soft, satiny silk, dreaming of the vision I’d be, draped in its glory. Not lolling anymore, I felt reinstated as queen, princess and diva! Possibly my abiding love for this particular weave was borne of that singular moment of possession. Favoured by royals through the centuries, the Banarasi weave has pride of place in almost every Indian trousseau even today. Endowed with a famous legacy, this splendid fabric, woven in the city whose name it proudly bears, continues to enthrall new generations and find new resonance in contemporary attire and decor.

Of what is made the warp, of what the weave?

What threads went into its weaving?”

Thus wrote Kabir, the iconic 15th century poet, central to the Bhakti movement. Supposedly a weaver by profession, Kabir is also said to have been born in Benares. He liberally used metaphors from his craft in his dohas (couplets) to explain the universe as he saw it and to question extant religious practices. Voiced with wondrous awe, Kabir’s verses imagine the secret supreme weaver spreading his warp as the world, fixing the earth and sky as pillars and using the sun and moon as his shuttles even as he takes thousands of stars and perfects the cloth. Kabir’s metaphorical universe arises from the mundane and material and one can envision the actual looms and shuttles he is referring to, the “fine, fine cloth” made with exquisite threads, the thrum and bustle in the poet’s surroundings. In fact, by the time of Kabir, Benares was already a well-known centre for textiles.

Nestled along the banks of the Ganga, hymns in the Rigveda referred to this ancient city as Kashi from the Sanskrit root kas - “to shine”, thereby identifying it as the “luminous city of light”.  Writing in the 2nd century BC, the Sanskrit scholar Patanjali describes the superiority of cotton textiles from Kashi. Reference to the existence of a robust trade in Indian cotton textiles is found in many texts from ancient times. The Roman historian Pliny, writing in the 1st century AD complains that Indian luxuries, including fine muslins referred to as ventus textilis (meaning “woven wind”) is a drain on the Roman economy.  Late ancient and early medieval texts continue to refer to this industry in Benares while centres in Gujarat are noted for the production of silk textiles, particularly luxurious samite (from the Byzantine Greek hexamiton, meaning “six threads” indicating the use of six yarns in the warp) and rich brocades (from the Italian broccato, meaning “embroidered cloth, produced by a supplementary non-structural weft). Bengal was another famous centre of textile production, specialising in fine cotton and muslin textiles.

The weavers in Benares slowly switched to silk-weaving around the 14th century. This received particular impetus under the Mughals from the 16th century onwards under whose patronage skilled Persian nakshabandhas, experts in tying designs to looms were invited to settle in the city. Their intricate designs, known as jalas, achieved by a special technique of raising the warp threads to facilitate the weaving of brocades, using gold and silver threads, soon became the speciality of Benares. This industry was further enlivened after silk weavers from Gujarat migrated to the city in 17th century after a famine in that region in 1631. The weavers of Gujarat were highly skilled in the weaving of kinkhwabs or kamkhwabs (meaning “beyond a dream”).

Much of our knowledge about these sumptuous textiles comes from the accounts of travellers at the Mughal court such as Francois Bernier, written records by local historians and the minutely detailed paintings done by court artists between 1590 and 1800. Bernier described “the consumption of fine cloths of gold and brocades, silks, embroideries” in the Mughal harem as “greater than can be conceived”. The A’in-i-Akbari (Institutes of Akbar), an organisation of every department of Emperor Akbar’s court by Abu’l Fazl ‘Allami gives rich information about textiles at the court. The 32nd A’in called A’in-i-shal (shawl cloth) lists all the types of cloths in the royal storeroom, divided into headings such as “gold stuffs”, silk, cotton and woollen cloths. The finest textiles were laborious and time consuming to make, using expensive materials and dyes. The production of such articles was under the patronage of the Indian courts - the Mughal court, the Deccani Sultanates, the North Indian Rajputs and the Marathas of Central and South India.

Few extant examples of these exquisite textiles created in the karkhanas (workshops) of Benares survive. While master karigars (a title reserved for Banarasi kamkhwab-weavers) were acknowledged and rewarded, individual names of famous master weavers are hard to find. One unusual brocade length, now displayed in the V & A Museum is a rare find in this regard. Inscribed in Persian script as well as Latin letters, an embroidered inscription is woven into the fabric: Kamkhwab-i-zarbaft jaldar ganga jumna gulnar. Karigari Baks Miyan sakin-i Kamalpura ma’rifet Mu’in Lal sakin-i Gaighat (Gold-woven kamkhwab trellis pattern in gold and silver with flowers. The craftsmanship of Baks Miyan, resident of Kamalpura (District of Benares) for Mu’in Lal, resident of Gaighat). Originally displayed in the Indian section of the Great Exhibition of 1851 in London, the names of the Baks Miyan and Mu’in Lal however do not appear in the exhibition catalogue. This piece along with its sister piece is listed as “productions of the native manufacturers of the City of Benares”.

A vast array of Indian textiles (including silk and gold brocades from Benares and Gujarat, woollen shawls from Kashmir and diaphanous muslins from Bengal) selected by the East India Company made a dramatic impact at the Great Exhibition. Held up as exemplars of great design, writings of that period describe the refined sophistication and exquisite craftsmanship of Indian fabrics. The representation of Indian artisans at 19th century international exhibitions however became increasingly problematic, focusing on romanticized visions of Indian labour and largely erasing individual Indian artisan identities. Moreover under the colonial rulers, the textile industry, one of the leading industries in pre-colonial India, suffered a particular setback in all its sectors through deliberate negative policies of the British colonisers. The fact that traditional Indian textiles have regained their pride of place in the world today is testimony to the resilience of its creators and craftsmen, the continued patronage of its consumers, passionate and informed advocates and specific policies of the Indian government to reinstate the handloom industry. The famed aesthetic legacy of the Banarasi brocade for instance has found a new lease on life by establishing a nexus between designer/creator and patron/consumer.

A tremendous variety of silk and cotton yarn, in different permutations and combinations, is used to weave Banarasi brocades. From heavy silk Katans to gossamer-light Koras, weavers can create fabrics with an astonishing range of textures. Islamic tradition forbade the wearing of silk next to one’s’ skin and this led to the innovation of mashru (literally “permitted”), a delicate fabric where silk forms the surface and cotton threads form the under layer. A deep understanding of naksha making and jala attachments allows weavers to visualize and pre-programme intricate designs resulting in stunning weaves such as gyasar (brocades used in Tibetan tangkhas), jamdani (figured muslin weaves), abarwans (“flowing water” brocades), kadhwa (embroidery-like designs), jamawar (jacquard designs) and tanchoi (involving a single or double warp and two to five colors on the weft, often of the same shade) among others. Patterns ranging from natural motifs such as keri (or paisley) and amru (or tree of life) to floral latticework, arabesque and calligraphic designs, reflect the inspirational legacy of the Banarasi weavers, distilled and synthesized through the centuries. The patterns are usually etched with zari - gold or silver thread (from Farsi and Urdu zar, meaning gold). Even though by the 17th century, Surat had perfected the production of this supple and strong metal-wrapped thread, the rise in the use of zari  in weaving (the yarn specifically termed kalabattun) synchronized with the rise of Benares as a weaving centre in the late 18th and especially during the 19th century.

The Indian loom went through several innovations to meet the demands of increasing intricacy in design vocabulary. By 1000 AD, the pit loom was widely used in India (it remains the most common handloom used today). All basic weaves involving a single warp and a single weft such as twill, plain weave and satin were produced on the pitloom. With hand manipulation, the weaver could also create additional weft techniques such as brocading in jamdani and other brocades. Further innovations led to the use of the Persian and Indian drawlooms, in which the sitting weaver operated the pedals that raised and lowered the warps of the ground weave while an assistant, the drawboy, sat above the warps on a raised platform and selected individual leashes to create the figurative patterns. These looms were responsible for the earliest surviving Indian complex woven silks - the samite weaves from Gujarat with their two-warp system. The drawloom continued to be widely used in Gujarat and Benares even after the introduction of the semi-automated French jacquard looms in the 19th century, which eliminated the necessity of the drawboy by using punch cards to mimic their actions. Gradually in Benares too, drawlooms were modified with jacquard mechanisms and by the end of the 20th century, the commercial use of entirely hand-operated drawlooms had ceased.

The city of Benares is a palimpsest of inherited memories. Its buildings and monuments, ghats and alleys, culture and industry carries echoes of the past. The past and present come together in a vibrant weave as the city gears up to celebrate the philosophy and poetry of Kabir, through the Mahindra Kabira Festival (November 22-24, 2019). Kabir’s syncretic legacy is needed even more today than ever before. Maybe, just maybe, a vision of the future, a future “beyond a dream” will be born in this most ancient city of cities nestled on the edges of the Ganga.

beautifully rendered .. such wealth in the weaves of benaras ! in more ways than one ... so much learning .. thank you Ranu