MEMORIES OF ANOTHER TIME 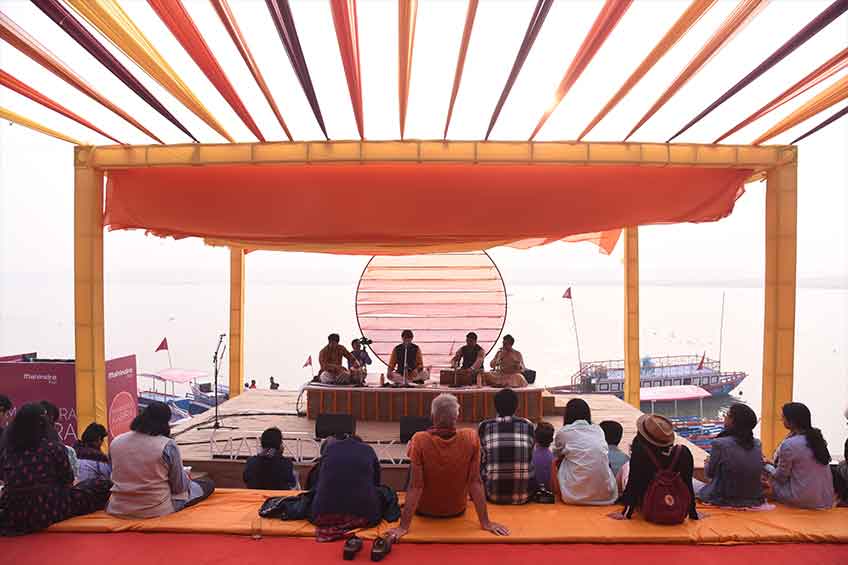 I close my eyes and my 8-year-old toes curl against the cool stone step that leads down to Prayag Ghat and I can hear Shivranjani and Tally chattering away behind me.

These two are forever giggling I think and as I turn to say ‘shhhh’; out of nowhere spills out a heartstopper voice and a single note floats out of a green-shuttered window up to the blush pink sky and tumbles down the scuffed stone steps where all 18 of us stand in school uniform and unspools into the Ganga where marigolds are dancing.

Everyone freezes.
No one moves. .
None of us speak.
The birds quieten.

It's as if the Earth herself pauses when Benares sings.

Listening to the first note of an ‘Aalap’ is my first-ever toe-dip into the Benares Gharana of music. Even 40 years later, I have the same toe-curling-on-cool-stone sensation of a young child on a boarding school midterm break!

I did not even know it was Aalap till so much later, sitting enchanted with my mother at an all-night concert while she whispered ‘Aalap, Bada Khayal, Chota Khayal’, to me and I tried to pull her shawl onto my freezing legs.

There are many things I would give up to nestle against my mother while she hums under her breath and we live our life at an all-night concert.

Till then I have Khayal and Thumris and all her shawls.

It is said the great Thumri singers in Benares and Gaya evolved a unique and powerful style of khayal known as the Banaras gharana; maybe the proximity to the Kashi Vishwanath temple & the Ganga prompted many Hindustani classical singers to conglomerate at the city. The unforgettable voices of Girija Devi, who is often credited with founding the Banaras Gharana of singing and could sing not just the thumri but the khayal, tappa, daadri, kajri, chand, praband and taraane and other classical compositions, Chhannulal Mishra, Rasoolan Bai still resonate in the alleys of Benares where music schools jostle for space.

The Benares Dance Gharana of dance has two of the greatest performers in recent memory: the epic Sitara Devi and Nataraj Gopi Krishna. And its own stylistic tradition, concentrating on the charisma of dance.

Indian tabla’s shining Gharana is indisputably the Benares Gharana, founded by Pandit Ram Sahai in the 18th century. As are Khayal and Thumri the primary classical forms of the music of the Gharana. The initial identity of Benares was and continues to be the Thumri.

At the Mahindra Kabira Festival this year (on from 26th -28th November, 2021), which will be held on the ethereal ghats of Varanasi along the misty Ganga, you will have the joy of being up-close with maestros across the spectrum. Kalapini Komkali, Pt Anoop Misra, Nirali Kartik, Askari Naqvi. Storytelling with Raman Iyer & The Bards, Purbayan with Gayatri Asokan, Umesh Kabir’s Saheb Bandagi, the DPS Choir, music and poetry with Chinmayi and Joell and the venerable Divyansh Harshit Srivastava on Santoor.

This is one Gharana of music that has the power to underline emotions, to create ambience.

Imagine if the genres were limited to the banks of the Ganga, they would not have absorbed influences that make them richer. Whenever there is a rustic and earthy regional absorption, the purity of feelings are amplified.

Classical singing of the Benares Gharana compositions are truly beautiful with a vast repertoire of evocative poetry. If dance in Benares is about charisma and an element of surprise, its music is about raw emotion and passions. Authentic and inescapable.

Living side-by-side with our shadows. Moving across time and space, alongside us wherever we go.

Will this magnificent Benares Gharana of music fade into the wallpaper of our life?

It cannot. As we carry its imprint with us.

It travels across time, cities, over land, across oceans, flying through unknown skies to live wherever those who learn, listen, look for, laugh over, lean into memories rich with a

The Benares Gharana has a far reaching legacy. As a well-established Gharana, its elements will always ‘travel’ far and wide. Every musician, every layer of generation has enriched that tradition. A maestro's children and disciples are spread all over the world and as they travel, perform and teach, they carry it forward.

Since purity is not the only thing in these continuing traditions, these elements of a Gharana get absorbed as leitmotifs. So a composition belonging to the Benares Gharana is likely to travel to another continent and maybe some elements, the way it was sung or presented, will get absorbed by another musician or people of another lineage.

This is how legacy lives on. Nothing dies.

What is the heirloom of the Benares Gharana that will seep into other generations, live on in culture, communication or in the narrative? The clarity in pronunciation and the clarity of literature in the compositions are a breakthrough. Not many Gharanas do it the way Benares Gharana does the music delivery. And then combines it with a befitting ‘bhava’.

Like fragrant incense, the Benares Gharana seeps into collective consciousness. Leaving wisps of heart-tugs and a smudgy fingerprint of memories.

How do I know this to be true?

Because my daughter Nayantara sits cross-legged in faraway Oakland, whispering ‘Alap, Bada Khayal, Chota Khayal’ to Paolo her fiancé, wrapped in her grandmother’s shawl, while he leans into my mother’s voice. Some legacies live on long after us.

Make your own memories; create your own legacy at the Mahindra Kabira Festival 2021. Visit www.mahindrakabira.com NOW!